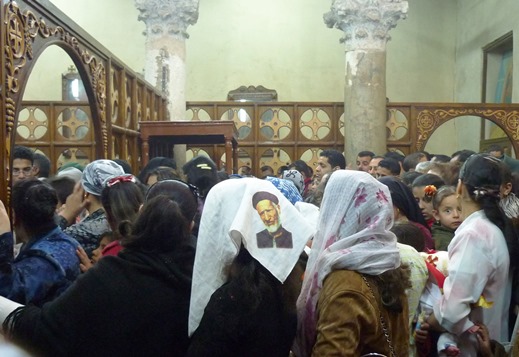 Congregation in a Coptic church, Egypt. Photograph by Tineke Rooijakkers.Thursday, 10 March 2016, was a special day for various reasons, but mostly because of the defence of her PhD thesis, by Tineke Rooijakkers. Tineke became part of the TRC family when she was a first year archaeology student and attended a lecture I gave about archaeological textiles. It apparently made sense to her and she has been following and studying dress and identity and Middle Eastern textiles ever since. Initially she was helping at the TRC as a student volunteer, later she was working with the collection, helping visitors, and writing a BA thesis on dress, and so forth.

All of this led to her working on a PhD as part of a project organised by Prof. Bas ter Haar Romeny (Amsterdam University, VU; and TRC board member) about Coptic identity in Egypt, with Prof. ter Haar as supervisor, and dr Mat Immerzeel and myself as co-supervisors. Her thesis looks at dress and identity in both antiquity and the present. It is called Dress Norms and Markers. A comparative study of Coptic identity and dress in the past and present. Much to Tineke’s surprise (but nobody else's), her thesis not only gave her the title of Dr. but also a cum laude, which within the Dutch academic system is the highest distinction you can achieve.

Well done Tineke, we are very proud of you.

TRC in a nutshell

The TRC is open again from Tuesday, 2nd June, but by appointment only.

The TRC is dependent on project support and individual donations. All of our work is being carried out by volunteers. To support the TRC activities, we therefore welcome your financial assistance: donations can be transferred to bank account number NL39 INGB 000 298 2359, in the name of the Stichting Textile Research Centre.
Since the TRC is officially recognised as a non-profit making cultural institution (ANBI), donations are tax deductible for 125% for individuals, and 150% for commercial companies. For more information, click here
Financial donations to the TRC can also be made via Paypal: